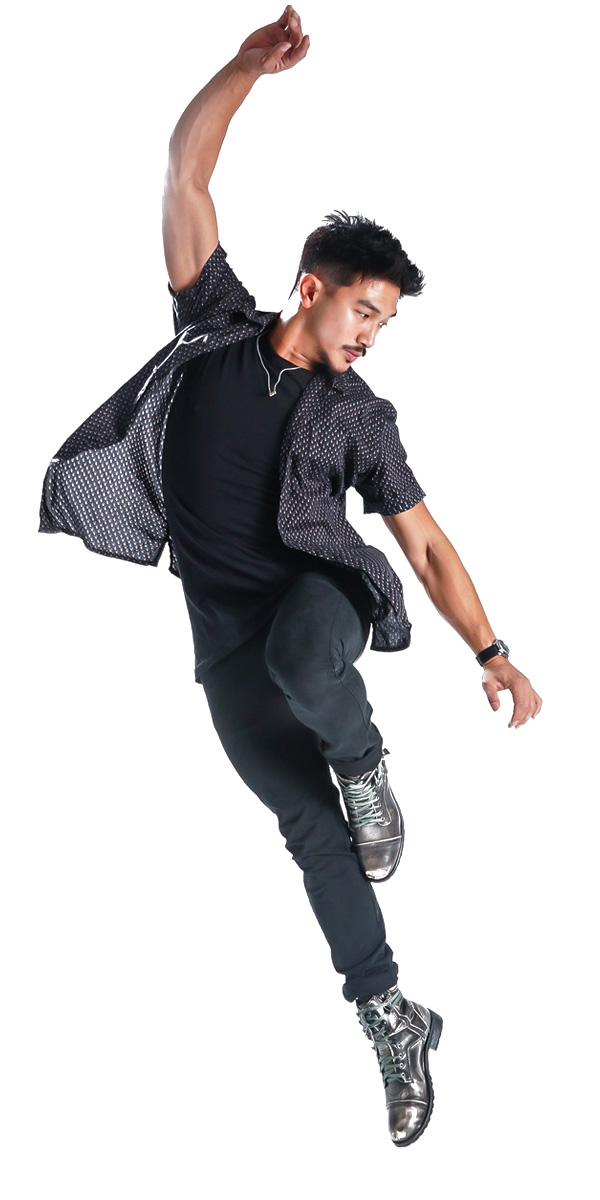 Originally from the small island of Guam, he moved to Los Angeles to pursue a professional career in dance. His first job was performing for an indie ballet dance musical, “The Question” and since then has performed on many other stage live performances throughout Los Angeles. He was also a chorus dancer for the opera show “Carmen” in Houston, Texas and was a performer for Disneyland’s “Aladdin” the musical spectacular and enjoys entertaining kids. He also has television credits such as “Shake It Up“, “Austin & Ally“, “Liv & Maddie“, Jerry Lewis’ show, a guest performer at the Regis and Kelly show, The Voice, dance appearances on the Ellen show, Bunheads, Glee, and X-Factor; award shows such as The American Music Awards, The Grammy Awards, and People’s Choice Awards; a Microsoft commercial, McDonald’s commercial, Virgin Airlines‘ safety video, Mercedes-Benz commrcial, and was the top male and 3rd finalist on FOX’s hit show “SO YOU THINK YOU CAN DANCE” and later became an All- Star/Mentor for consecutive seasons. He has also danced for films such as “No Strings Attached“, “Behind the Candelabra“, “Teen Beach Movie“, “Step Up 5“, and “Teen Beach Movie 2“. He has worked for artists such as The Muze, Vicci Martinez, Cee Lo Green, Jennifer Lopez, Selena Gomez, Taylor Swift and PINK. He has assisted for many known choreographers in the industry, such as Nappytabs, Sonya Tayeh, Tyce Diorio, Liz Imperio, Marguerite Derricks, Stacey Tookey, Jamal Sims, and was the associate choreographer to Christopher Scott for the closing ceremony of the European Games Baku 2015. He was also a core dancer for FOX’s “Grease Live” that aired on January 2016. His most recent credit is being part of the ice skating show, “Art On Ice”, that toured around Switzerland and had the opportunity of performing with European artists, Emeli Sandé and Pegasus, as well as U.S. olympic gold medalists, Charlie White and Meryl Davis. He loves and enjoys sharing his passion for the arts through different forms of expression and his personal goal is to inspire people all throughout the world and be inspired as well in the process.

Marko Germar has various training from ballet to Hip Hop and loves to fuse different styles of movement based on the interpretation of a piece of music. He specializes in contemporary style of movement that uses fluid isolations and physical strength. His goal in teaching is not to reinforce technique, which he believes should be done by studio teachers and owners, but rather to explore and enhance the bridge between movement and emotion which will help dancers lead to a better form of performance, expression and interpretation. His experiences in assisting many known choreographers in the industry, along with his job experiences as a professional dancer for 10 years, has allowed him to teach for numerous workshops and conventions, and has taught master classes for dance studios, of all ages, across the country. Beyond dancing, his passion is emotion and helping others to understand their own.